South Dakota Governor Kristi Noem announced yesterday that she will sign a bill ensuring women’s sports teams and public schools be reserved for those who are biological females.

The Women’s Fairness in Sports bill passed the South Dakota House 50-17 last month, and was passed by the Senate yesterday in a 20-15 vote.

In response to the news of the bill passing in the South Dakota senate, Noem tweeted, “In South Dakota, we’re celebrating #InternationalWomensDay by defending women’s sports! I’m excited to sign this bill very soon.”

A spokesman for Noem told Fox News, “We anticipate that when Governor Noem signs the bill, South Dakota will be the first state this year to pass legislation of this sort.”

During his first day in office President Joe Biden signed an executive order which dictates that federally funded educational institutions must admit biological males to women’s sports teams and scholarships.

Last month, when White House Press Secretary Jen Psaki was asked about the executive order, she said Biden’s belief is that “trans rights are human rights.”

“And that’s why he signed that executive order,” she said. “And in terms of the determinations by universities and colleges, I would certainly defer to them.”

Poll: What Would Be Your Favorite GOP Presidential Ticket in 2024?

The 2024 presidential election will be here before we know it and we would like to know who would be your favorite GOP presidential ticket?

Take the poll below and let us know.

POLL: 17% of Biden Supporters Wouldn't Have Voted For Him if Media Told the Truth

If it weren’t for the Leftist media’s coverup of negative stories about Joe Biden, President Trump would have likely already been declared the winner of the 2020 presidential election, according to a new poll of swing state Biden supporters conducted by the Media Research Center (MRC).

The poll surveyed 1,750 Biden voters across Wisconsin, Pennsylvania, Nevada, Michigan, Georgia, Arizona and North Carolina and found that the media’s censorship of both positive Trump stories and negative Biden stories actually cost Trump the election (that is, if you believe Biden legally “won” the race).

MRC polled voters’ knowledge of eight major news stories which the liberal media failed to cover fairly or properly. “We found that a huge majority (82%) of Biden voters were unaware of at least one of these key items, with five percent saying they were unaware of all eight of the issues we tested,” writes the organization. “This lack of information proved crucial: One of every six Biden voters we surveyed (17%) said they would have abandoned the Democratic candidate had they known the facts about one or more of these news stories.” 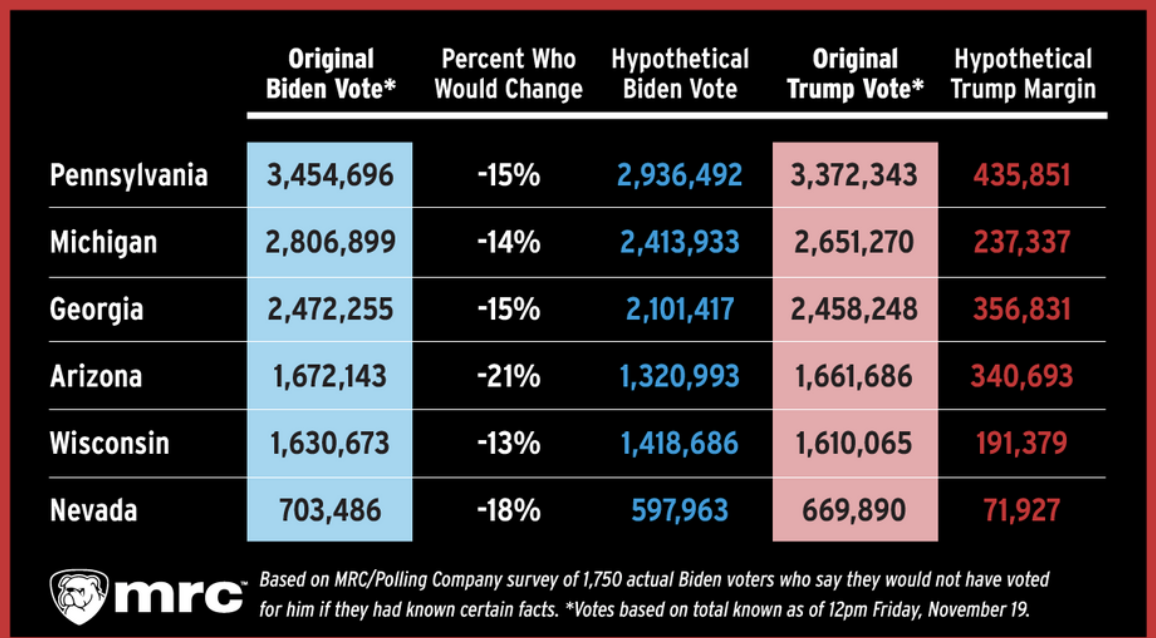 A vote change of this size would have changed the outcome of the election in all six of the swing states which Biden “won.”

It’s disturbing (but not the least bit surprising) to think that if journalists actually did their jobs, the election chaos we are currently facing could have been completely avoided.