Photos taken during Biden’s press conference on Thursday show several cheat sheets he used to answer questions. One of them even had the names and headshots of reporters he planned to call on.

Biden did not take any questions from conservative reporters and had to look down and read from his sheets quite often.

Charlie Kirk asked the question, “If Joe Biden can’t stand up to Peter Doocy are we really supposed to expect him to be able to stand up to Xi or Putin?

Not a single question from a conservative reporter.

If Joe Biden can't stand up to Peter Doocy are we really supposed to expect him to be able to stand up to Xi or Putin? 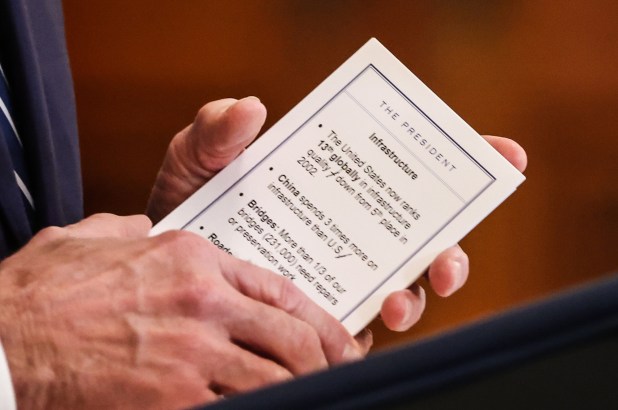 The president also used notes to assist with facts about US infrastructure, a policy area Biden is focusing on during his first months in the White House.

“The United States now ranks 13th globally in infrastructure quality — down from 5th place in 2002,” read one bullet point.

But despite having the answers in front of him, Biden still slipped up, saying America ranked 85th in the world in infrastructure, before correcting himself.

The press pool at Thursday’s briefing, the first one held by Biden since taking office 65 days ago, was limited to 25 reporters.

Biden only took questions from a list of journalists whose names and outlets he read from a cue card. A photo of the card shows circled numbers around select reporters.

While the Biden Administration refuses to acknowledge its own manufactured crisis at the U.S. border, reports are now circulating that severe overcrowding has led to children going hungry and sleeping on floors—and in one instance—a facility has reached 729 percent of its legal capacity.

According to the Daily Mail, similar situations are faced by more than 3500 unaccompanied minors, some of them young children, being held in detention centers in border regions all across the state.

The government’s 72-hour maximum time for a child to be detained also seems to be far from reality in these facilities, as children are spending an average of 108 hours in these places. Some reports indicate that some children have had to spend as many as 10 days or more in these facilities due to immense delays.

“This situation mandates immediate action to protect the life and safety of federal personnel and the aliens in custody,” wrote Michael Meade, the acting assistant director for ICE’s field operations, adding that the crisis is likely to “grow over the coming months.”

According to a recent CBS report, one CBP facility in Donna, Texas was holding more than 1,800 people, which is 729% of its capacity.

“Most of the minors said they had only showered once while in U.S. custody, even though they’d been held for more than five days, according to Desai. Some said they had showered twice,” reported CBS.