Former President Barack Obama never passes up an opportunity to gaslight the country over race, and he did so again this week with an outrageous tweet that came just a day after the horrific massacre of children and adults at Robb Elementary School in Uvalde, Texas.

For some reason known only to him, Obama tried to link that heartbreaking incident to the death of George Floyd.

Nineteen children and two teachers of Robb Elementary School were murdered by an 18-year-old gunman, who was killed during a gunfire exchange with authorities. Tuesday’s tragedy is now among the worst mass shootings in U.S. history.

The bloodshed in Uvalde occurred one day prior to the two-year mark of the death of George Floyd, which sparked civil unrest across the country in 2020 after viral footage showed Minneapolis Police officer Derek Chauvin kneeling on him as he repeatedly claimed he couldn’t breathe until he died. Chauvin was convicted of second- and third-degree murder last year.

“As we grieve the children of Uvalde today, we should take time to recognize that two years have passed since the murder of George Floyd under the knee of a police officer,” Obama wrote Wednesday. “His killing stays with us all to this day, especially those who loved him.”

“In the aftermath of his murder, a new generation of activists rose up to channel their anguish into organized action, launching a movement to raise awareness of systemic racism and the need for criminal justice and police reform,” the former president continued before plugging an initiative for his foundation. 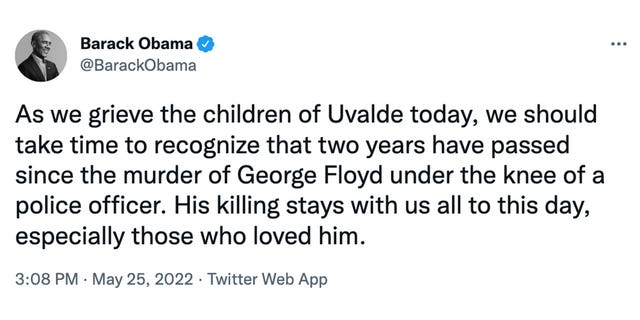 Needless to say, Obama’s worst-than-tone-deaf tweet generated no small amount of outrage, and rightfully so.

“Not a single grieving parent today gives a rip about what happened to Floyd or anyone right now,” Redstate editor Kira Davis responded. “For crying out loud. This is not the time to be advertising for your favorite activist group. How utterly vile.”

“What in the world does the former have to do with the latter?” Ben Shapiro asked.

“Bro. Not the same. At all,” Fox News contributor Ben Domenech tweeted at Obama.

“Brah, this ain’t it. Little kids slaughtered at school is not the equivalent of Floyd dying after resisting arrest while high,” Blaze Media podcast host Jason Whitlock wrote, noting: “This is one of the worst tweets in history.”

President Joe Biden’s highly political response to the tragedy also drew pushback after he used his national address the evening of the shootings to blame the ‘gun lobby’ and Republicans.

“Biden had a chance to unite the country in our mourning of the lost innocent children but instead he rambled about the gun lobby, attacked Republicans, and wandered off the stage. We are being led by an incompetent, incoherent fool who also happens to be a very bad man,” the Daily Wire writer Matt Walsh said.

“Joe Biden cannot help but use that stupid, lazy, inappropriate gun about deer in Kevlar vests. What a disgraceful moment in this inappropriately political speech. But yeah… he’s the unifier-in-chief,” radio host Jason Rantz added.

“Biden opened with a heartfelt and heart wrenching message to the families of the massacred children. He quoted Scripture. Had he only stopped there. But then he launched into a vicious, ugly, political tirade. A lost moment to unite a divided nation,” said conservative commentator Todd Starnes.