The Georgia 2020 election audit continues to play out like a Netflix miniseries, ripe with twists, turns, and a whole lot of fraud. On Friday, Henry County Superior Court Judge Brian Amero ordered the unsealing of 147,000 Fulton County, Georgia, absentee ballots.

“The integrity of future elections is critical, and Judge Amero’s decision is a helpful step in restoring transparency, accountability, and voter confidence,” former Senator Kelly Loeffler (R-GA) told The Hill.

Judge Amero’s announcement “forces Georgia’s largest county to allow a group of Georgia voters and their experts to inspect copies of 147,000 mail-in ballots cast in light of their evidence-challenged claims that the ballots were fraudulent.”

Former President Donald Trump lost the state’s most populated county in November to Democrat Joe Biden by a vote of 381,144 to 137,240, with a 65.57% voter turnout, according to Fulton County’s official results.

Trump lost the state by around 13,000 total votes.

Fulton County includes the city of Atlanta and has an estimated population of just over 1 million, according to the county.

In his one-page order, Amero’s order said the county election officials must allow plaintiff Garland Favorito and his group called Voters Organized for Trusted Election Results in Georgia to review the ballots “at a time and place to be determined later,” according to The Wall Street Journal.

The county said in a statement it would comply with the order. “We will continue to participate the judicial process that will ultimately validate the integrity of the elections process within Fulton County,” the statement said.

Georgia now joins Arizona in having votes audited because of lawsuits following the election.
An audit of the populous Maricopa County is currently underway by a private Florida firm called Cyber Ninjas, hired by Republicans for $150,000.

Like Fulton County in Georgia, Maricopa County in Arizona is the state’s largest county by population and includes the city of Phoenix.

The audit in Arizona is expected to last for another six weeks, as the firm reviews 2.1 million ballots.

The Arizona audit created a firestorm when Cyber Ninjas initially accused the county of “deleting data,” that they later said they found through recovery efforts. Elections officials said the data was never deleted and accused the firm of incompetence if it was unable to find it.

Close examination of Windham’s 10,000 ballots from the November 2020 election have auditors and volunteers for the secure audit facility in Pembroke saying they may be close to an explanation for vote discrepancies.

“Something we strongly suspect at this juncture, based on various evidence, is that in some cases, fold lines are being interpreted by the scanners as valid votes” said independent auditor Mark Lindeman.

Auditors said the scanners could be interpreting the fold lines as a vote when they go through a “vote target,” or a candidate’s name on the ballot. They said a lot of Windham’s ballots appear to have fold lines across the target of a Democratic state representative candidate.
“Wherever the fold happened to be was, I guess, most commonly through my name,” said the candidate, Kristi St. Laurent.

“Because if someone voted for all four Republican candidates and the ballot happened to have its fold line going through St. Laurent’s target, then that might be interpreted by the machines as an overvote, which would then subtract votes from each of those four Republican candidates,” said auditor Philip Stark. “Conversely, if there were not four votes already in that contest by the voter, a fold line through that target could have caused the machine to interpret it as a vote for St. Laurent.”

The hypothesis will be tested extensively, but auditors said the fold line issue might not be isolated to just Windham’s machines.

“Throughout New Hampshire, you’re using the same voting machines, the AccuVote, and in principle, it could be an issue,” Stark said. “It really depends where the folds are in relationship to the vote targets.”

When it comes to the redistricting process, Republicans won where it mattered. GOP victories in state level elections could really pay off, as it’s yet to be seen what will happen with the current chaotic presidential election race.

The census happens every 10 years and with that, districts are redrawn on the map to account for population changes. Gerrymandering is a tactic used by whoever is in power to redraw the maps to favor their party. This is where things went very well for Republicans as they are now able to redistrict 188 congressional seats which accounts for 43 percent of the entire House of Representatives. Democrats will only control around 17 percent.

See the map below posted by FiveThiryEight 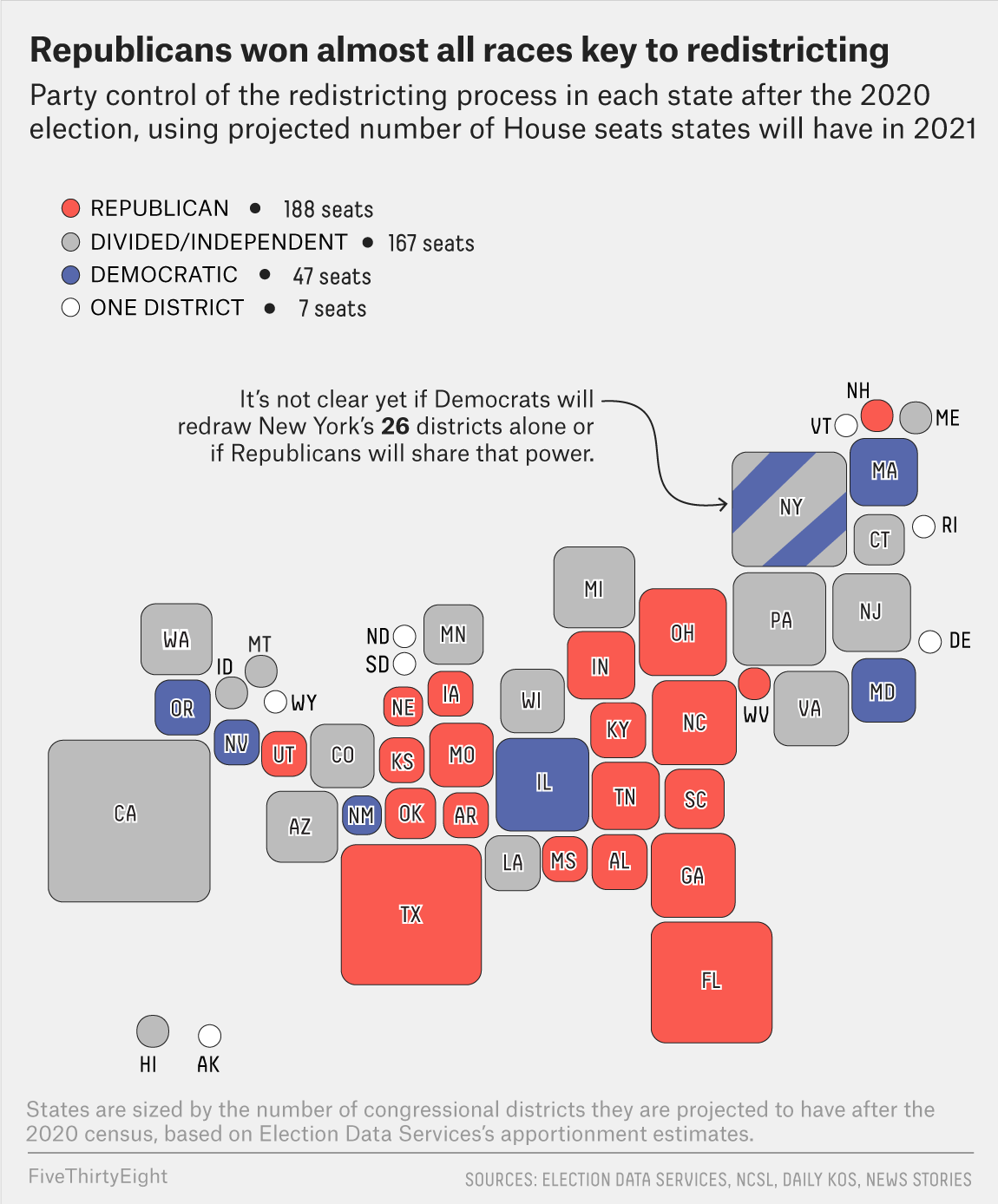 How did Republicans pull that off? By winning almost every 2020 election in which control of redistricting was at stake:

The GOP kept control of the redistricting process in Texas by holding the state House. Given that Election Data Services estimates Texas will have 39 congressional seats for the next decade, this was arguably Republicans’ single biggest win of the 2020 election.

Republicans held the majority in both chambers of the North Carolina legislature, which will enable them to draw an expected 14 congressional districts all by themselves.

Amendment 1 passed in Virginia, taking the power to draw the state’s 11 congressional districts out of the hands of the all-Democratic state government and investing it in a bipartisan commission made up of a mix of citizens and legislators.

In Missouri (home to eight congressional districts), Gov. Mike Parson was elected to a second term, keeping redistricting control in Republican hands.
In an upset, Republicans managed to keep their majority in the Minnesota state Senate, thus ensuring Democrats wouldn’t have the unfettered ability to draw the state’s projected seven congressional districts. The parties will share redistricting responsibilities there.

The GOP kept control of the state House in Iowa, with its four congressional districts.

Republicans maintained their supermajorities in the Kansas Legislature, enabling them to pass a new congressional map (worth four districts) over Democratic Gov. Laura Kelly’s veto.

Finally, Republicans surprisingly flipped both the state Senate and state House in New Hampshire (worth two congressional districts), seizing full control of both the state government and the redistricting process.

The one state where Republicans may not have gotten their preferred outcome is New York, where we still don’t know who will control the redistricting process because the state is taking so long to count absentee ballots. If Democrats win a supermajority in the state Senate, they will have total veto power over the state’s projected 26 congressional districts. Democrats are close to clearing that bar, but we won’t know if they make it for, potentially, weeks.

Only time will tell what will happen when it comes to redistricting, especially with such a contentious race and elections in multiple states still being contested.