Police in Los Angeles have released new information regarding the murder of 24-year-old Brianna Kupfer, a Pacific Palisades woman who worked at Croft House furniture store who was stabbed to death last week in an apparently random attack.

The LAPD has identified a suspect — 31-year-old Shawn Laval Smith, who police say should be considered armed and dangerous, Breaking911 reported. 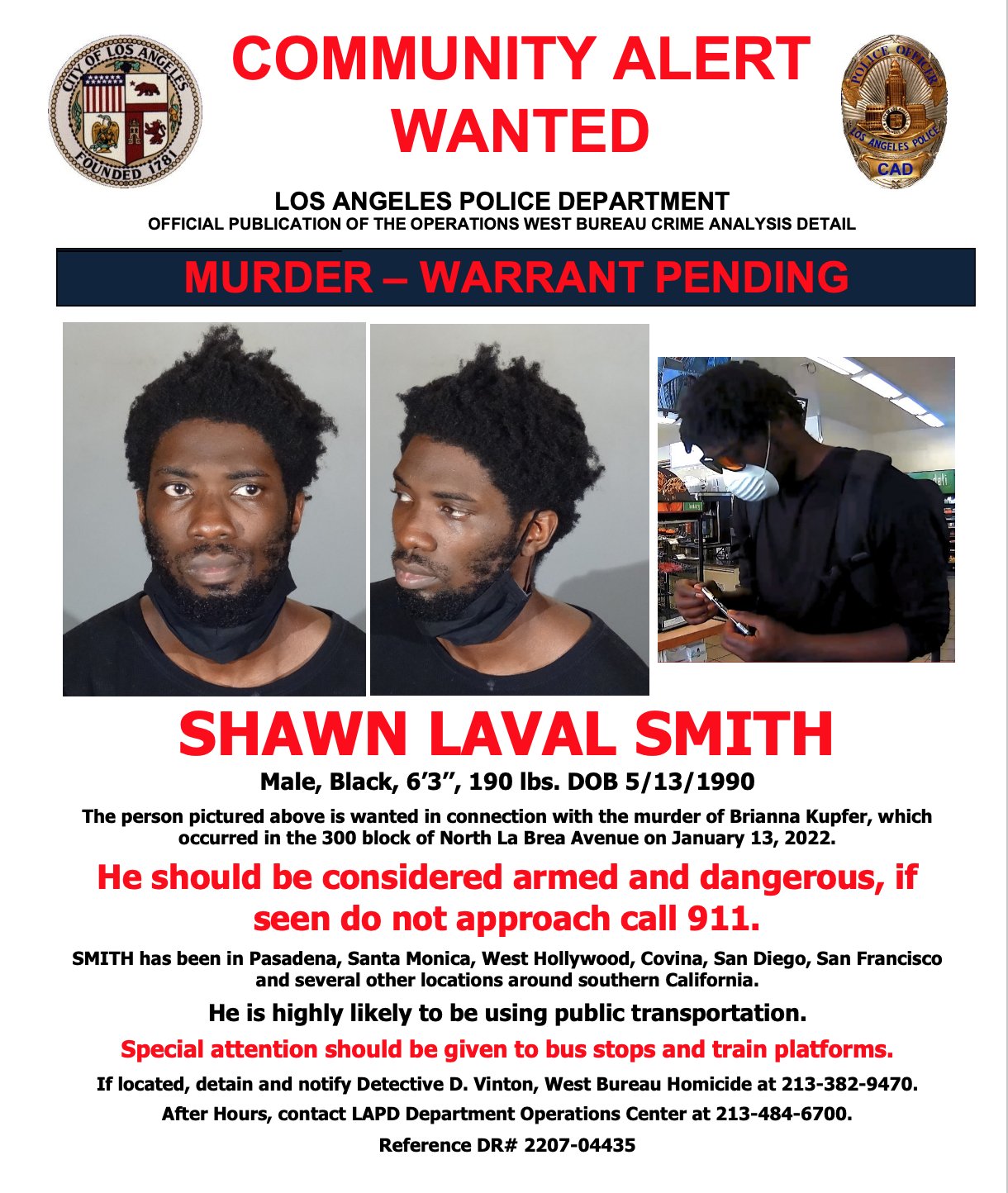 On Thursday afternoon, January 13, 2022, around 1:50 p.m., Wilshire Patrol officers responded to a radio call of an “Ambulance Assault with a Deadly Weapon” at a business, located at the 300 block of North La Brea Avenue. The officers met with the reporting party, a customer who had entered the store and discovered the victim deceased on the floor.

Detectives have determined the suspect was not known to the victim and was a random walk in to the store. The suspect attacked the victim with a knife and fled the scene through the back door. There is no known motive at this time. The suspect was last seen on video surveillance northbound in the alley to the rear of the crime scene.

Below is security camera video from a 7-Eleven at Beverly and Wilshire boulevards. Police say it was recorded about 30 minutes after the murder.

Interestingly, police have also revealed that Kupfer texted a friend of hers when the alleged killer was inside the furniture store, saying that she had a “bad vibe” about the suspect. But her friend did not see the text right away, Breaking911 reported.

Here is more on the suspect:

“I’m absolutely devastated for her and her family,” Riley Rea, a co-owner of the store, told the Los Angeles Times. “It just seems so disgusting and unexpected. Really there are no words to say how shocked we are to lose such a wonderful person.”

“It is with great sadness that the entire Kupfer family mourns the passing of our beautiful daughter Brianna as a result of this horrific attack,” her family said in the statement. “Brianna, who was born, educated and was building her career here in Los Angeles, was a rising star in this community whose ascent was unnecessarily cut short by the actions of a heartless criminal last Thursday. In many ways she embodied everything that is great about Los Angeles, and the entire city should grieve over this senseless act.” 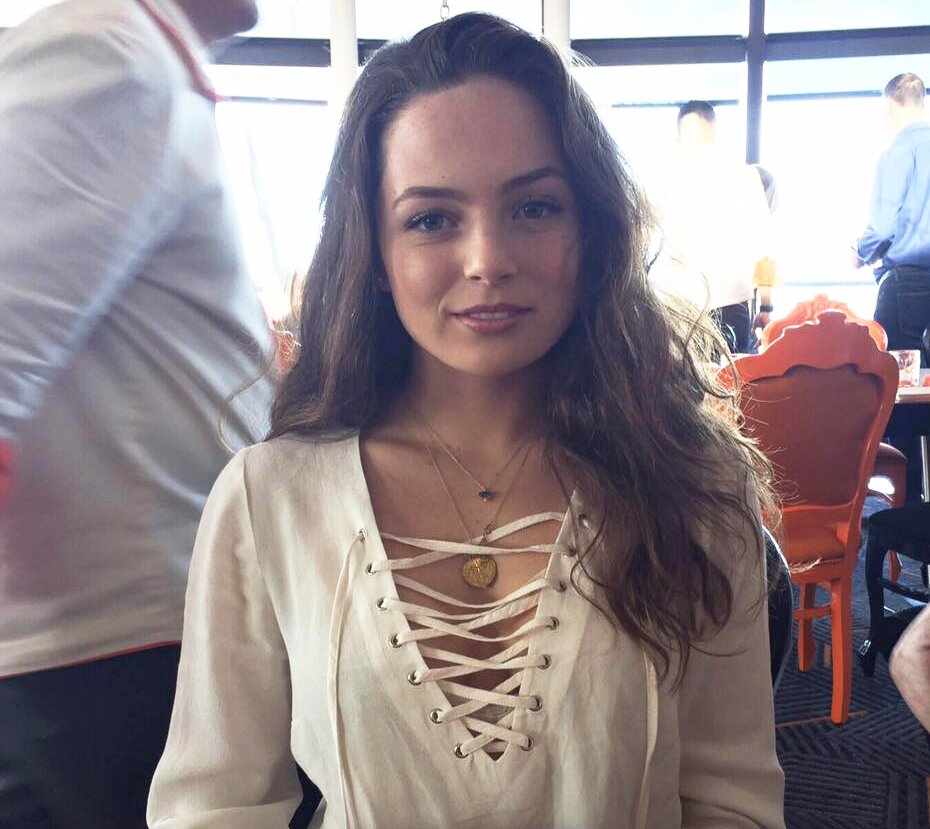 The suspect is described as a male Black, unknown age, tall, thin, wearing a dark hoody, sunglasses, a white N-95 mask, dark skinny jeans, dark shoes and carrying a dark back pack. Based on evidence discovered by detectives, the suspect is believed to be homeless.

Anyone with information should contact West Bureau Homicide investigators at (213) 382-9470. During non-business hours or on weekends, calls should be directed to 1-877-LAPD-24-7 (877-527-3247). Anyone wishing to remain anonymous should call Crime Stoppers at 800-222-TIPS (800-222-8477). Tipsters may also contact Crime Stoppers by texting to phone number 274637 (C-R-I-M-E-S on most keypads) with a cell phone. All text messages should begin with the letters “LAPD.” Tipsters may also go to LAPDOnline.org, click on “webtips” and follow the prompts.

Sadly, it’s not at all clear how interested L.A. County District Attorney George Gasćon is in solving this crime, as horrific as that sounds, given his track record of reducing charges, seeking lighter sentences, and refusing to prosecute many crimes, all of which have led to dramatic rises in all kinds of criminal activity in his jurisdiction.

Most recently, a top official with rail carrier Union Pacific appealed to Gasćon to step up prosecutions of people who have been breaking into cargo containers and stealing millions of dollars worth of merchandise.

In a letter to Gascón, the rail carrier’s general director of public affairs, Adrian Guerrero, demanded that he help end the “spiraling crisis of organized and opportunistic criminal rail theft,” adding, quite shockingly, that “over 90 containers are compromised per day.”

Criminals are caught and arrested, turned over to local authorities for booking, arraigned before the local courts, charges are reduced to a misdemeanor or petty offense, and the criminal is released after paying a nominal fine.

These individuals are generally caught and released back onto the streets in less than twenty-four hours.

Even with all the arrests made, the no-cash bail policy and extended timeframe for suspects to appear in court is causing re-victimization to UP by these same criminals. In fact, criminals boast to our officers that charges will be pled down to simple trespassing – which bears no serious consequence. Without any judicial deterrence or consequence, it is no surprise that over the past year UP has witnessed the significant increase in criminal rail theft described above.

No wonder L.A. is turning into a dangerous cesspool of crime.